Martin subscribed to Le Corbusier’s belief that “the plan is the generator [of form]”, and the form of the building is determined by the internal arrangement of differently sized boxes – placed at different levels and ingeniously interlocking with one another.  The resulting agglomeration of massive cubic blocks is clad in buff brick – chosen, though this is not very apparent to the observer, to harmonize with the stone of the adjacentHolywell Manor and St Cross Church – and broken up by long strips of plate glass windows in metal frames: a favourite Corbusian mannerism.  The most striking feature, though, is the monumental staircase, leading from St Cross Road to the English and Law Libraries on the top floor, and conjuring up subliminal images of the Odessa steps in Eisenstein’s Battleship Potemkin – a film much admired in the 1960s. 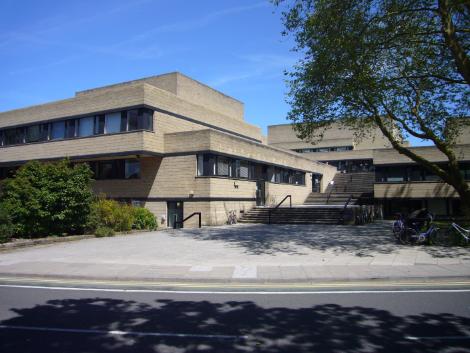 Universty College  Leicester was expanding rapidly after the end of the Second World War and seeking University status, it wanted to make a statement with its new buildings. Leslie Martin, by then a leading exponent of Modernism, was asked to create a master plan for the university’s building programme, which he did. He called in a number of leading Modernist architects of the time to design some of the buildings but one building complex he designed himself. This includes the Physics and Astronomy Building.

with Robert Matthews and Peter Moro

Designed by Leslie Martin and Sadie Speight for Alastair Morton 1937